Hello everyone. My name is Vidal Karan and I'm a co-founder of Hot Chocolate Games, currently fulfilling the role of programmer and artist. I painted the current web banner and I'd like to take a moment to talk about the process. 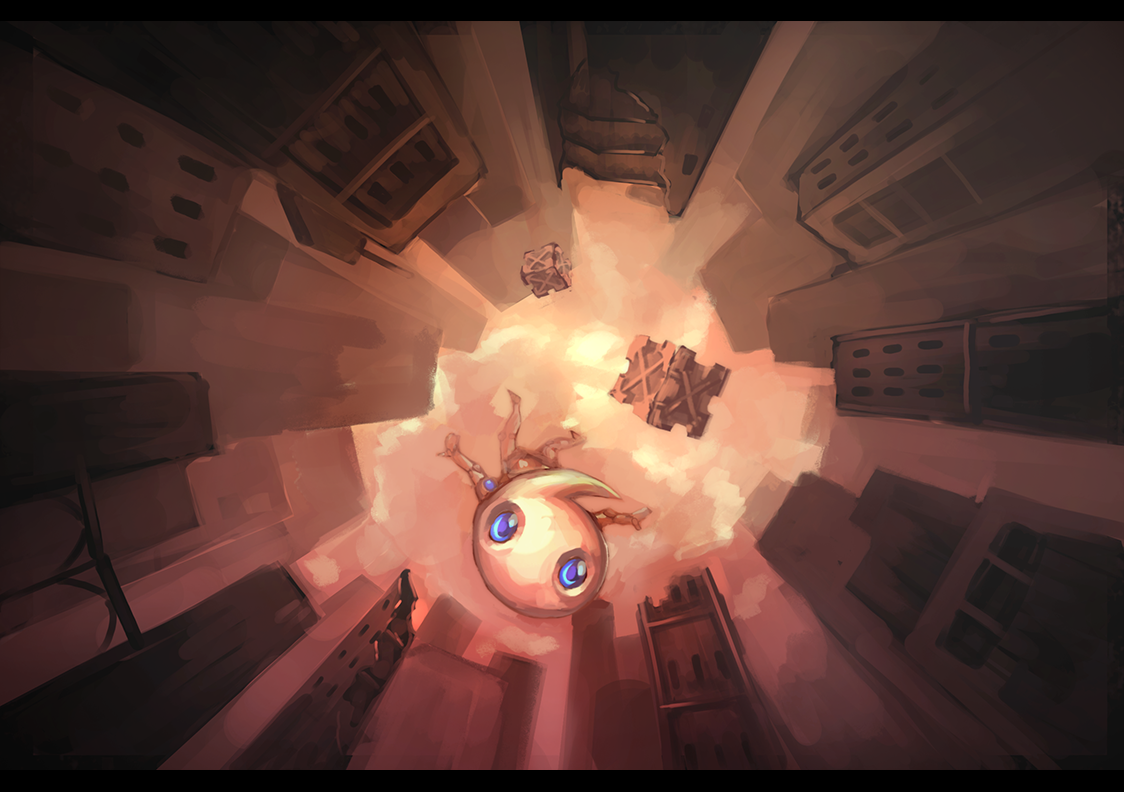 This painting was done relatively late in development. We had already finalized Grobo's design, and the color palettes for many of the backgrounds. Being as this is the website banner, I tried to incorporate as many elements from the game as I possibly could. It had to include Grobo. There had to be a large emphasis on the derelict but interesting world. Lastly, the image had to somehow incorporate Grobo's gravity shifting ability.

As with any painting, the first step was to thumbnail some ideas. 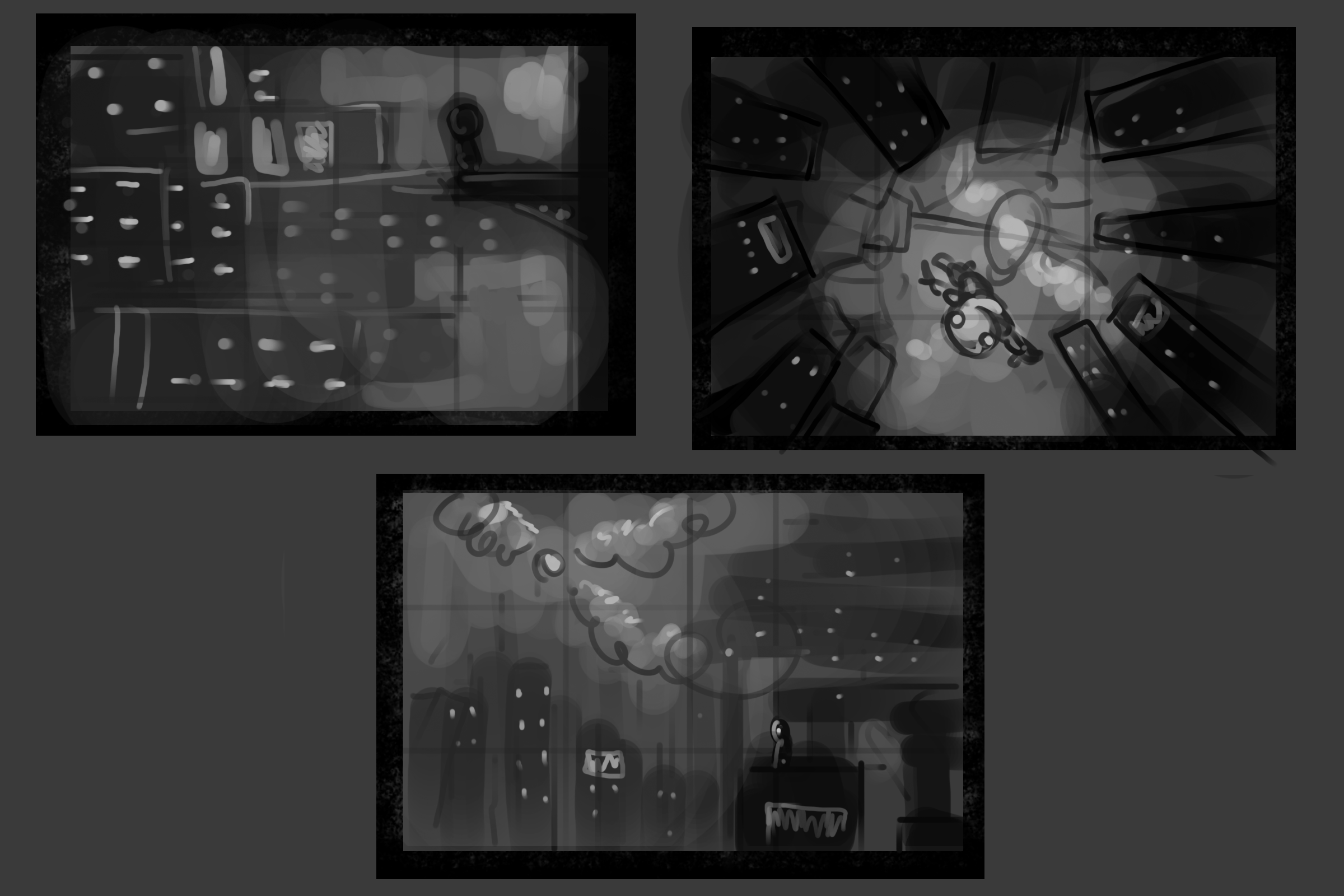 The goal with the thumbnails is to nail the composition and values early. I try to block out the dark areas, midtone areas, and the areas of light. Also, I'm making an effort to draw in aesthetically pleasing shapes. The top right thumbnail is really the only one here where I liked the shapes that came out. It also had the most interesting composition. The pointing buildings are dark and happen to lead the eye directly to Grobo, who is a single dark silhouette against a light sky. 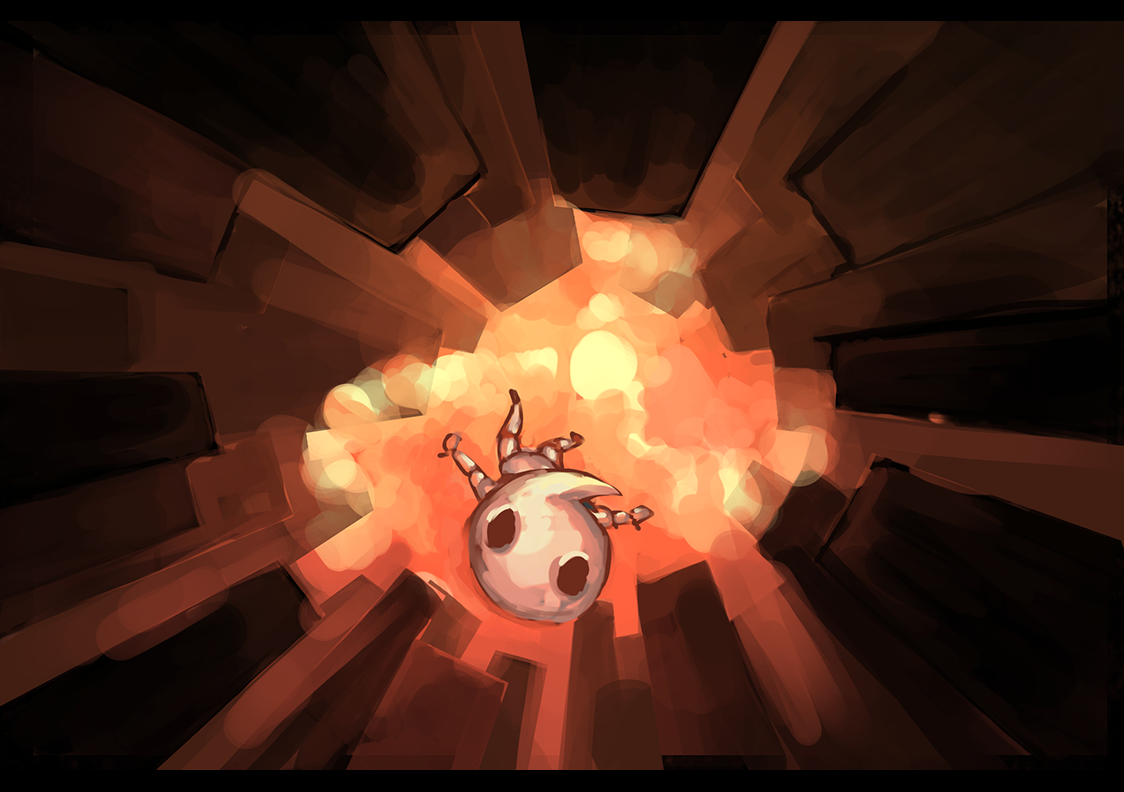 Here I've begun to add color. The great thing about digital painting is that you generally don't need to worry about exact colors early in the painting. As you work, Photoshop’s many color correction options and after effect features allow you to adjust the colors easily.

You'll notice the painting is very dark here. One common and very useful way to paint is to start dark and add in the light as you work. You'll notice a theme as each progress piece gets slightly lighter. Also, one compositional adjustment I've made here is to increase the number of buildings. The hard edges of the buildings all lead the eye to the center, and by extension, to Grobo. 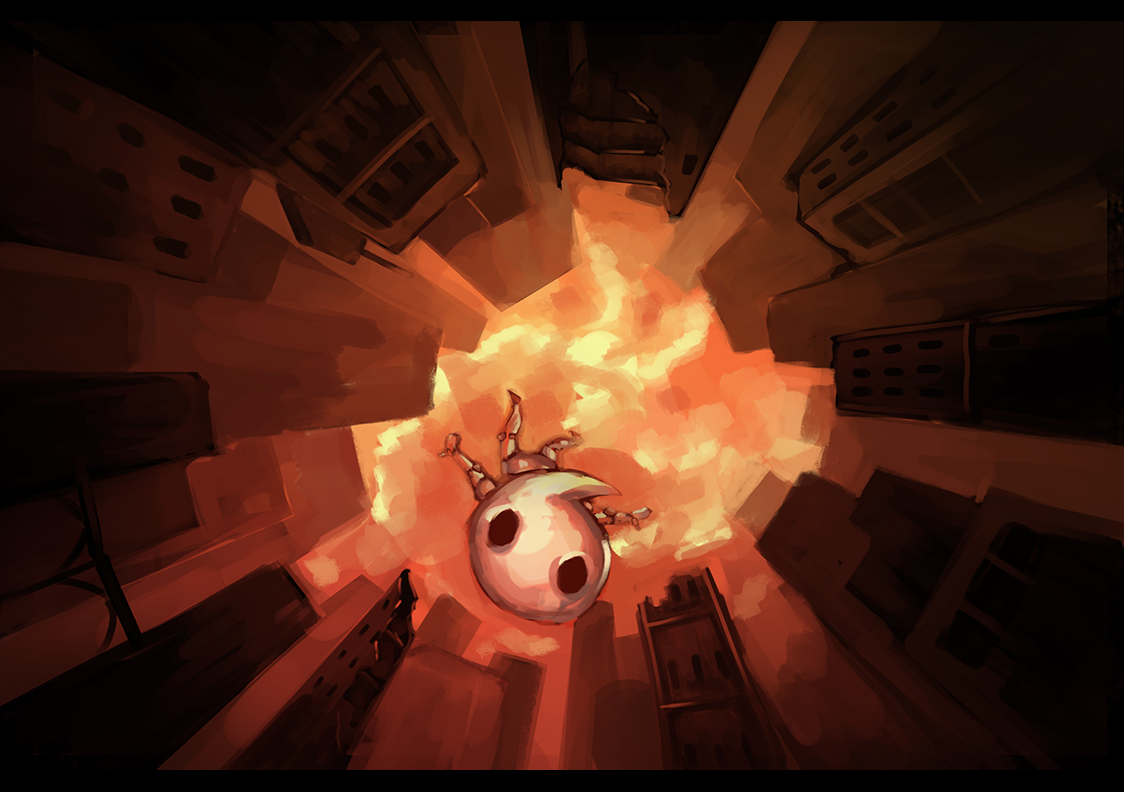 Once the painting is largely planned, it’s just about crunching out details. I picked a few key buildings closest to the viewer and rendered them. One interesting thing to notice here is that a majority of the brush strokes in the buildings point towards the center. This creates a sense of movement and helps to sell the idea that Grobo is falling towards the center. I also make an effort to paint in a few partially destroyed buildings to add some character and story to the painting.

One additional tip for paintings like this is to keep an eye on the value histogram. In Photoshop, you can generally bring this up with Ctrl+L. The histogram is just a chart of your values. A good painting will have a relatively smooth chart, typically peaking towards the center. If you notice your histogram looks less like a hill and more like a heartbeat monitor, you need to check your values and render some more details. 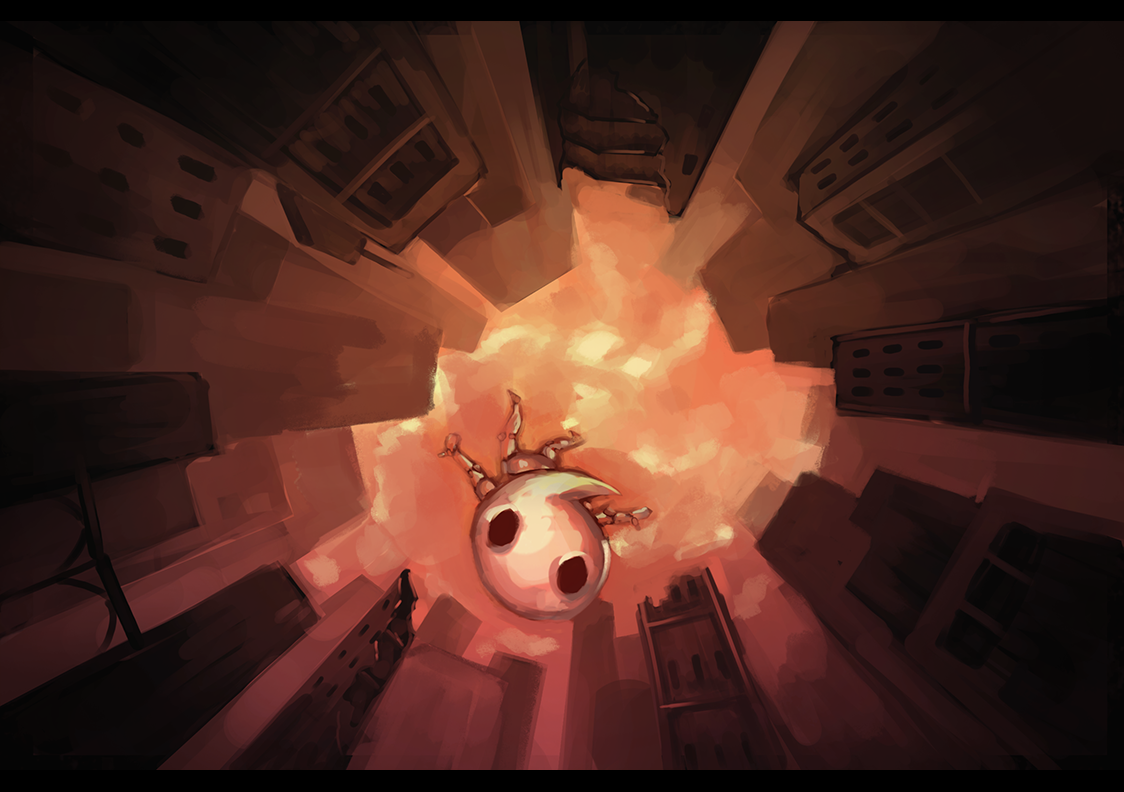 Here I cheat a little. You'll notice my colors have been complementary at this point: reds, oranges, yellows, browns. That's fun and all, but I know in the future I'll have to paint in Grobo's blue eyes, and they'll stick out too much against the rusty background. To create a bit of unity, I used Photoshop’s color adjustment to cool off the darker parts of the painting. I removed some of the red and added in some blue. This also makes the painting easier on the eyes. 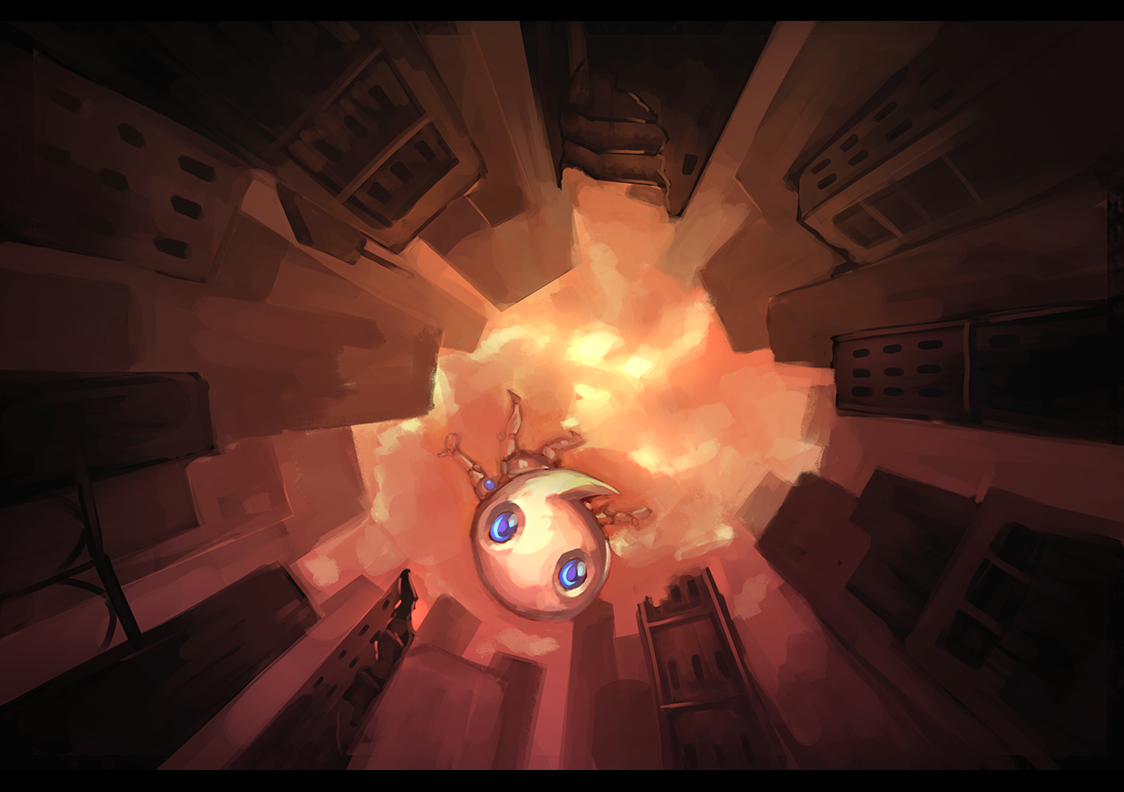 With that in mind, I paint in the eyes. I also paint in a lot of little details on Grobo's body. I've also lightened his face and some parts of the buildings to really sell how powerful the light from the sky is. Around here I take a long break. Taking a break during paintings like this is crucial to making the end product very strong. The longer you stare at a painting, the more you take its mistakes for granted. After coming back after a few hours, I sit down and realize the painting is still too dark…

...so, I lighten it. This is a combination of Photoshop’s curves and color adjustment tool. One unfortunate aspect of Photoshop's color correction tools is that you lose detail when you use them. As I correct my colors, I keep checking the histogram to make sure the painting doesn't lose too many values. If I notice the chart starts to break apart, I'll go in and repaint in some details. Depending on where the breaks are, I'll purposefully add back in some dark or light colors.

The falling crates were added in to increase the sense of motion, and also as an additional compositional tool. If the eye wanders to the furthest crate, it tends to follow its motion to the closer crate, and then back to Grobo.

So, there’s a really quick and dirty breakdown of the painting process for the website banner. This same method is used to paint many of the backgrounds and level select images in the game, and it gives the game an interesting painted feel.

Stay tuned for more information on the game.