Hello everyone! Lead Game Designer Steven here. Today I want to talk about how I go about designing the mechanics for Grobo such as gravity manipulation and crates. This post includes some useful tips for game design, so I hope it helps all of you prospective game designers reading it!

A game is about play. It’s about being able to interact with it and having direct impact on the outcome. Big production games nowadays have visuals on par with movies and incredible soundscapes that fully immerse you in the world, but visuals and audio don’t make a game a game. Mechanics do. Mechanics lead to gameplay which allow a player to interact with the world in a way that books and movies cannot emulate. Since mechanics separate games from other mediums, it means that they are the most crucial element when designing a game. Grobo is no exception and we have taken great care in designing the mechanics.

I separate game mechanics into two major types: core mechanics and augmenting mechanics. Core mechanics are the most important type of mechanics in your game. Your game should be built around these and the types of possibilities that can emerge from exploring them. If you were making a sandwich, this would be your bread. In a game like Portal, it’s the ability to...well, shoot portals and to walk or jump through them. In Pokémon, it’s the capability to capture, train, and battle. For Grobo, it’s the ability to manipulate gravity and walk around to solve puzzles based on that. Incidentally, those are the only two mechanics that the player has direct control over.

Augmenting mechanics are interactions that should enhance your core mechanics. In our sandwich metaphor, these are what you put in the middle of your bread like peanut butter, cheese, or meat. In games, they can be hazards like the light bridges, companion cubes, and acid in Portal. These can block off possible paths to portal through or open up new paths when you let them pass through portals. They can be items, types, and stats like in Pokémon. These allow you to customize how you want to fight, how you want to train, and even your chances at capturing Pokémon. In Grobo, similar to Portal, these take the form of hazards such as spike balls, crates, and repulsion engines and each interacts with the core mechanics of gravity and walking in some way.

When designing mechanics, there are a lot of questions that must be asked, so I’ll just cover a few of the most pivotal ones. These don’t have to be answered in a particular order with the exception of one that should be asked after the others. However, all of these should be answered when designing a mechanic.

So let’s take a mechanic from Grobo and show you how these four questions were applied when I went about designing it. Let’s first look at the core mechanic of the game: the ability to change gravity.

What is its behavior?

As this is a core mechanic, this question is asking if the mechanic is interesting and simple enough to make the foundation of a game. Gravity manipulation is not something you see often as the focus of a game and is certainly not something we can do in reality. Since we’re making a puzzle game, the fact you can’t do it in everyday life makes it quite appealing as it will require people to think in ways they normally wouldn’t. This means it’s interesting. It’s also simple. People are familiar with the concept of gravity and the idea of being able to redirect it. This simplicity means it’s a great building block to create augmenting mechanics for. The limitation placed on it that you cannot change gravity while falling is a design choice. It could certainly be fun to be able to change gravity midair and slingshot around in a circle, but we decided not to pursue that due to the design of our game as a whole, which focuses on puzzles that do not have any screen scrolling. In other words, the ability to manipulate gravity while falling doesn’t fit our game, so we add the limitation.

It is very straightforward. The player swipes up, right, left, or down and gravity shifts to go towards that direction. Since the player character is subjected to gravity, it also moves in that direction. The fact you cannot take action while falling, but you can when on ground requires further effort on our part to make it clear as that is not necessarily what one would expect. For that, we can use visual cues to let the player know such as showing a glowing ring around the character when the player can take action.

Again, not too many puzzle games currently deal with gravity manipulation as the main focus of the game. Some do let you walk on walls and ceilings, but don’t always constrict you to just that wall or ceiling without making a major change (shifting gravity in our case). It’s neat to see things fly across a screen. There is a tension to see if you’ll land safely as well. Overall, it’s fun, but not terribly fun by itself. As mentioned earlier, it’s simple, but a great foundation to build upon. Most importantly, the mechanic drives how the game is meant to be played meaning it can lead to a lot of fun possibilities.

What is its behavior?

Crates have no behavior by themselves. The only interaction with the core mechanic of gravity manipulation is that crates fall in the direction of gravity. However, view the chart below. 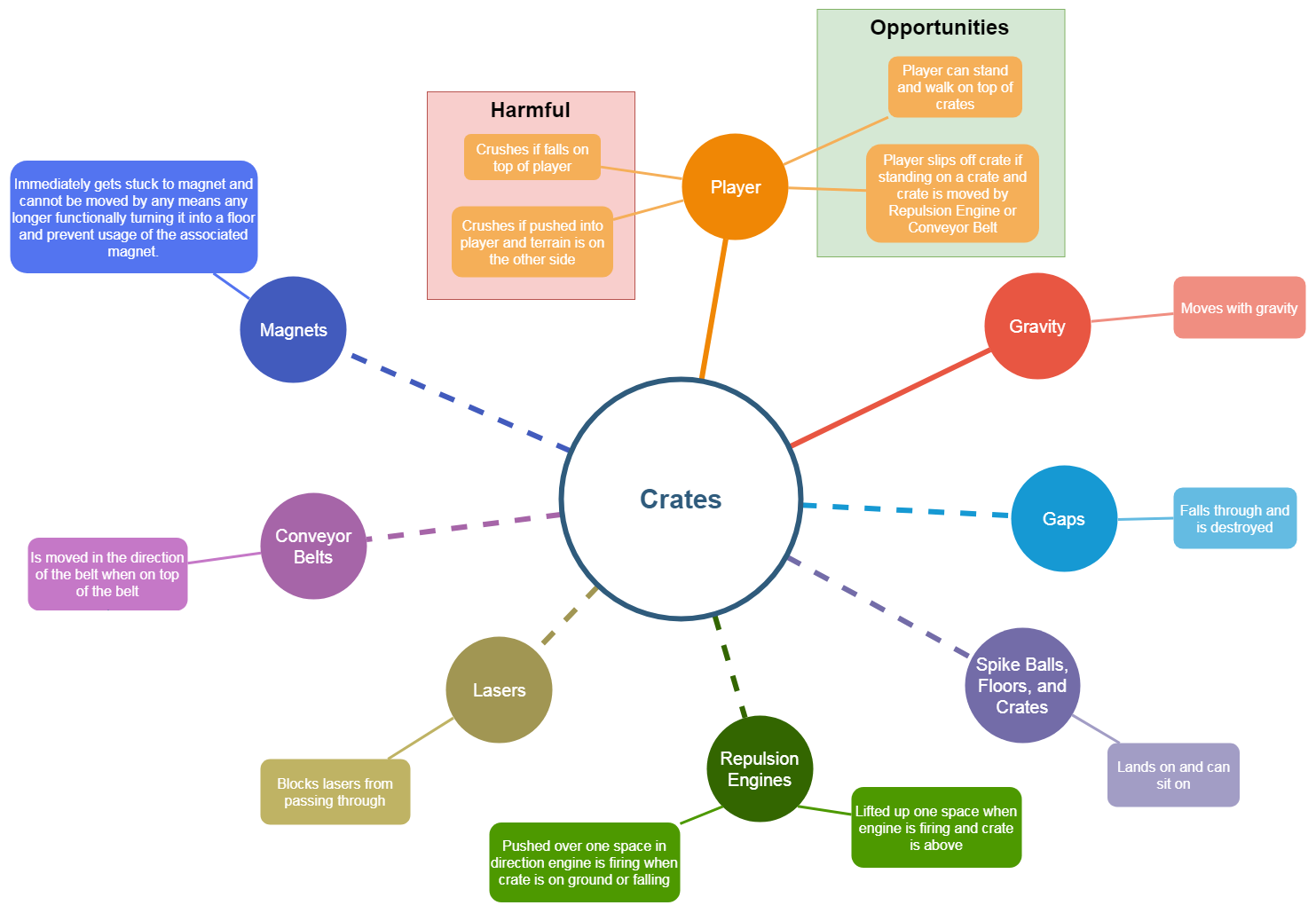 Crates have a copious amount of interactions with other mechanics. The solid lines represent the core mechanics of the player and gravity while the dotted lines represent other augmenting mechanics. The crate mechanic itself is simple in regards to what the core gameplay is - crates move with gravity, can crush players, and can be stood on top of by players. The crate can be both a hindrance and an opportunity to reach the goal of each level. However, the crate also interacts with every single other mechanic in the game. They can be lost through gaps, serve as temporary floors, stack on top of each other, serve as elevator lifts with a repulsion engine, block lasers, be moved without the use of gravity via conveyor belts, and turn into permanent floors when combined with magnets. There are a lot of ways to use crates, but the main ways to use them is very simple - just change the direction of gravity. Crates have a lot of depth with little complexity.

Crates interact with the core mechanic of gravity and pose both a threat and an opportunity to the player. Yes, a crate can crush and destroy the player, but it can also be used to walk across otherwise untraversable gaps in the floor. The setting is also a post-apocalyptic metal world, so metal crates certainly fit as opposed to, say, stone blocks.

As a large block that is the size of a floor tile, but looks very different, it’s definitely clear that crates do something different from floors. A single shift demonstrates that they move with gravity. Its size lends itself to the fact that it can potentially harm Grobo. Its equal size to a single floor tile can lead to belief that it can possibly be stepped on by Grobo.

Yes. Crates are simple to use, but have so much depth in their interactions. This creates something that is interesting and easy to explore, which leads to fun. A lot of things can happen with crates and other objects, but they’re not always apparent unless you actually try it out yourself. Discovering what something can do in a game can also be fun.